Night Vision Devices have been in use for almost more than 80 years now. With its initial debut in WWII. Back then the devices where heavy and bulky, most often only rifle mounted. These units consisted of a simple imaging tube, which didnt amplify any light, it only converted it.

Being able to pick up light in the invisible IR light spectrum a power consuming infrared light source was always necessary for it to be of any advantage over the enemy. This only worked as long as the enemy didnt have any night vision, because otherwise a so called active night vision system (any NVD using a additional light source, most often IR) would completely defeat its purpose to operate undetected at night.

The light source would appear as a bright spotlight and the opponent would be easily able to pinpoint the location of any opposing forces using active night vision. These devices, which where of no advantage without IR illumination and only converted light instead of amplifying it, are called Generation 0 devices or simply Gen 0. 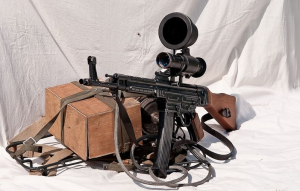